On the ride back from Redwood City to San Francisco, my manager John and I hardly said a word to each other. We’d just left the headquarters of Oracle, and one of my worst sales calls ever. During the meeting, I had done my best to identify specific objectives the company might have that would benefit from our sales- and leadership-training programs. I talked about the problem of decreasing employee turnover, how fostering teamwork encourages cross-selling, the challenge of improving new-product launches. Nothing resonated. I tried to discuss the impact of current market conditions, like competitive pressures on margins, and the specific circumstances created by a recent acquisition, to probe for an opportunity to bring value. I even described similar client circumstances to illustrate the kinds of results we had achieved. I was met with no interest. Zip, zilch, nada.

To break the deafening silence, I said to John, “Can you just tell me what the hell went wrong in there, or are you going to lead me through some laborious process of self-discovery?”

We both laughed, and then we had a very useful conversation. I knew how he coached, and it was extremely valuable on most days. We would dissect each interaction together. He would typically ask me what I thought was effective, and we’d discuss what the client had responded to best. Then we’d talk about what could have gone better, and he’d highlight skills to improve. The discussions were always focused on how I could further develop my abilities and meet my goals.

John Rovens was a terrific coach, and he invested a significant amount of time in my development as a sales professional. By the end of 1998, my third year in sales, I was the number 2  salesperson worldwide in the division of the Fortune 500 company we both worked for. I quickly became proficient at creating value in selling in large part because of the culture of coaching John created in our office.

We hear constantly about the importance and value of coaching, especially in sales. But, the reality I have observed while working with hundreds of organizations is that a true culture of coaching rarely exists. In a survey I conducted few years ago with a sales team in a Fortune 500 telecom company, I found an interesting contrast. Leaders reported that they spent a considerable amount of time coaching their direct reports and scored themselves high on their efforts– on average, just shy of the 80th percentile. Direct reports responded by saying that they’d received little to no coaching from their leaders and scored them low — on average around just the 38th percentile. 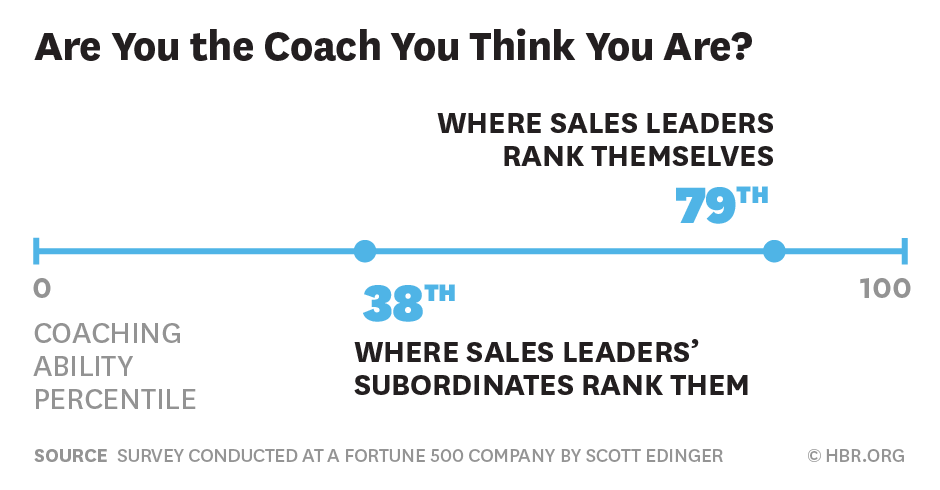 Then the leaders criticized their direct reports for being a bunch of ungrateful complainers. In their minds, these leaders had devoted all kinds of time to coaching.

But in reality that simply wasn’t so.

My observation is that in most cases, the further you go up the chain from managers, to directors, to VPs, the more sales leaders ask for help from their direct reports to do their own jobs, rather than investing time in improving the performance of their people.

Maybe a manager will spend time coaching his direct reports.  But a manager getting coached by a director? Or a director being coached by a VP for sales? That almost never happens. Instead, time for coaching to improve future performance is increasingly crowded out by time spent tracking and scrutinizing past results – that is, time spent requesting forecasts, reviewing pipelines together, revising forecasts, and pushing to close more deals in this quarter.

That may be necessary (well, that’s a whole different subject really), but if you want to improve the capability of your sales organization, rather than just keep track of it, coaching is the most powerful lever you have. And, creating a culture of coaching is your best bet. Here is how:

Before you suggest that this seems like a lot of work, I’ll concede the point. Coaching is a lot of work. But it needn’t take extra time if you consider the scope of activities sales leaders currently engage in. Take an honest look at the volume of effort your sales organization devotes to reporting, inspection, and scrutinizing results versus the time spent actively engaging in improving results. Create a coaching culture, and your leaders will spend considerably more energy on the latter.